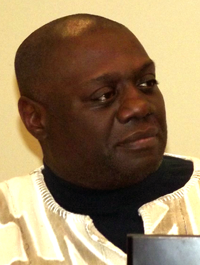 James L. Naazir Conyers, born in New Jersey, educated at Ramapo College, the University of Albany, Cornell University for KiSwahili and Temple University for the PhD, was an extraordinary man, devoted to his two sons whom he raised after the death of his wife, and to his profession. Conyers is credited with writing or editing more than 40 books covering almost every topic that one can imagine in building the discipline of Africology.

He received in doctorate from Temple in 1992 and went on to establish his footing in the field at Nebraska-Omaha, the University of Ghana-Cape Coast, Columbia University, and the University of Houston. Naazir believed in his chosen work and was a regular at the National Council for Black Studies and the Cheikh Anta Diop International Conference. This indomitable spirit never tired of promoting others and may be the person responsible for assisting more of his colleagues to gain tenure than anyone else.  His edited books are the jewels that he gave to every scholar who wanted to write something important. When he asked you to write a chapter for one of his many projects it was hard to say you could not do it.

He did what he knew, and he knew a lot. He honored his elders, took stock of the conditions of our people and tried to stand us up on our own two feet. When outstanding doctoral graduates needed postdocs, he bent his university’s budget to bring them to assist his program. Thus, Clyde Robertson, Reiland Rebaka, Michael Tillotson,  Akinyele Umoja, and Drew Brown are just a few of the famous beneficiaries of Professor Conyers’ special appreciation for the future of the field. Indeed, he maintained a relationship with all areas, schools and scholars in the field, from Massachusetts to Long Beach.

Our blessing is to have known him, to have listen to his determined and brief comments because he was not a man of lengthy remarks. Actually, at times he could seem quite reticent to speak but he was always prepared to defend our discipline. I last saw him when he introduced me to Lindsay Gary, one of his top students at Houston, who is now a doctoral student at Temple. I spoke for his department’s annual banquet two years ago and he made sure that I met Congresswoman Sheila Jackson Lee of Houston. The community came out to support him and his program and he made the synergy between the African American leadership and his department. So, the elephant has passed this way and has left his marks in the grass so that we can follow his trail to the same high victory he won with his life. Life eternal for he who knew no barriers to success for our field; may his name be praised forever! Ankh heheh!