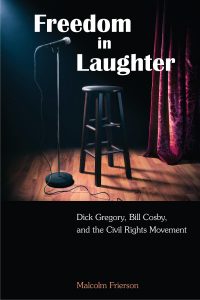 In this groundbreaking book, Malcolm Frierson moves comedy from the margins to the center of the Civil Rights Movement. Freedom in Laughter reveals how Dick Gregory and Bill Cosby used their increasing mainstream success to advance political issues, albeit differently. Frierson first explores Gregory’s and Cosby’s adolescent experiences in St. Louis and Philadelphia and then juxtaposes the comedians’ diverging humor and activism. The fiery Gregory focused on the politics of race, winning him credibility at the expense of his career in the long term, while Cosby focused on the politics of respectability, catapulting him to television and film stardom. With excerpts of Gregory’s and Cosby’s original material and an epilogue that considers the comedians’ post–civil rights era trajectories, this book is appealing to academics, history buffs, and anyone interested in American popular culture.