We Will Shoot Back: Armed Resistance in the Mississippi Freedom Movement 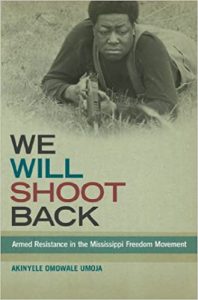 In We Will Shoot Back: Armed Resistance in the Mississippi Freedom Movement, Akinyele Omowale Umoja argues that armed resistance was critical to the Southern freedom struggle and the dismantling of segregation and Black disenfranchisement. Intimidation and fear were central to the system of oppression in most of the Deep South. To overcome the system of segregation, Black people had to overcome fear to present a significant challenge to White domination. As the civil rights movement developed, armed self-defense and resistance became a significant means by which the descendants of enslaved Africans overturned fear and intimidation and developed different political and social relationships between Black and White Mississippians.

This riveting historical narrative reconstructs the armed resistance of Black activists, their challenge of racist terrorism, and their fight for human rights.


Available on Amazon.  Now available as an Audiobook.

When you shop at smile.amazon.com Amazon will donate 0.5% of eligible purchases to NCBS after you select them as your charity of choice.
Same products, same prices, same services as the Amazon you know.